Round Robin Algorithm with implementation in Java

Why do we need scheduling algorithm anyway ?

We do multi tasking on our machines, we download a movie from the internet, play music, and do programming, all at the same time. But our computer don't have many cores, to take multiple requests. Our CPU uses context-switching to overcome the problem of lack of processing cores / processors. It might seem to us that all the processes are executing in parallel, but they are not. CPU's scheduling algorithm runs one process for some time, halts it, and runs other process for some time. This context switching is so fast that it seems that all the processes are running in parallel. 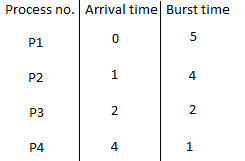 Now we have something called the "Ready queue" and "Running queue" in which processes are added. When Arrival time of CPU matches the CPU time, the process is ready to be processed and hence, added to the ready queue. For example, process p1 has arrival time 0, So currently our ready queue will have process p0.
Lets set the time quantum to 2 units.
After 2 units of time, process p2 will arrive and then it will be added to the ready queue
Ready queue is used to see the processes which have arrived, and processing is done in the "running queue".

After 2 units of time, process p2 and p3 will be ready for processing, so we can add them to ready queue. And since p1 is processed for 2 time quantums, its burst time will be reduced to 3. 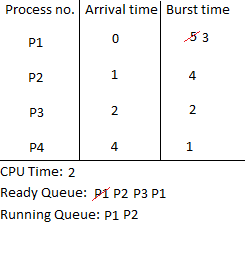 Notice that p1 is not yet complete, so we need to add it to ready queue again.
After 2 more time units, p2 will stop executing and p3 will come into running queue. 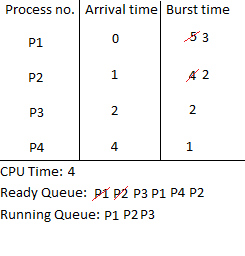 Now its p3's turn to execute. Since burst time of p3 is 2, it will completely execute, and will not be added to the ready queue again. 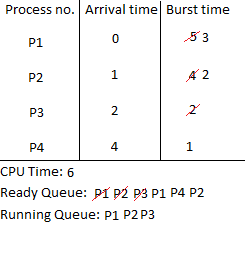 There's one more point to notice, process p4 has burst time of 1 units. So execution will happen for 1 unit, not 2 units which is the CPU's burst time.
In this way, all the processes execute until they have their burst time of 0 units.